What do all of these pieces of jewelry have in common? They are all made from ammunition scrap leftover from war, transforming violent intentions into symbols of peace. 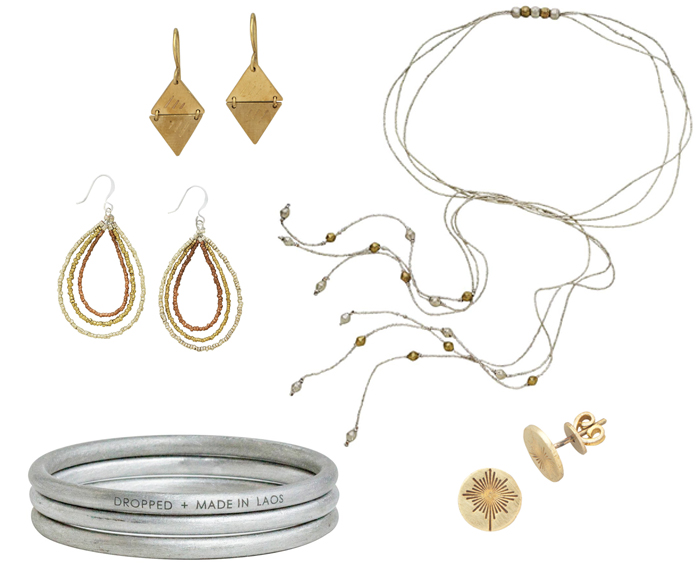 Our Ethiopian jewelry made from recycled bullet casings from the Eritrean-Ethiopian war. The Eritrean-Ethiopian war (May 1998 to June 2000) was a manifestation of tensions regarding the border between Eritrea and Ethiopia–an area under contention since the Eritrean War of Independence (1961-1991). The war was also one of great economic and social disruption in two of the world’s poorest countries, though it resulted in only minor border changes. The countries suffered tens of thousands of casualties as a direct result of the conflict and the fighting led to massive internal displacement in both countries as civilians fled the war zone. Ethiopia deported 77,000 Eritreans and Ethiopians of Eritrean origin it deemed a security risk, thus compounding Eritrea’s refugee problem. According to Human Rights Watch, detainees on both sides were subject in some cases to torture, rape or other degrading treatment. To make matters worse, all of this came at a time when the economies of both countries were already weak as a result of decades of cold war politics, civil war, and drought. The war exacerbated these problems, resulting in food shortages. Prior to the war, much of Eritrea’s trade was with Ethiopia, and much of Ethiopia’s foreign trade relied on Eritrean roads and ports. Amidst all of this chaos, these beautiful beaded hoops are properly named “Hoops of Hope,” acting as a symbol of hope for world peace, turning remnants from such a destructive war into a positive message for the future.

In addition to the significance of the materials used to create this jewelry, there is an equally meaningful story about the artisans who make these pieces by hand. In rural Gojam province artisans recycle and silver-plate these beads, which are then hand-strung at a workshop providing jobs to people with HIV/AIDS. Beza Entoto Outreach, the workshop that produces this jewelry, was started in response to the influx of people living with HIV/AIDS in Entoto, a region on the edge of Ethiopia’s capital city, Addis Ababa. An area with great historical and political significance, Entoto is also well known as a site of healing. Natural springs at the Entoto Mariam, one of the area’s oldest Ethiopian Orthodox churches, are believed to have healing powers and have attracted thousands of people who believe these holy waters will cure HIV/AIDS. 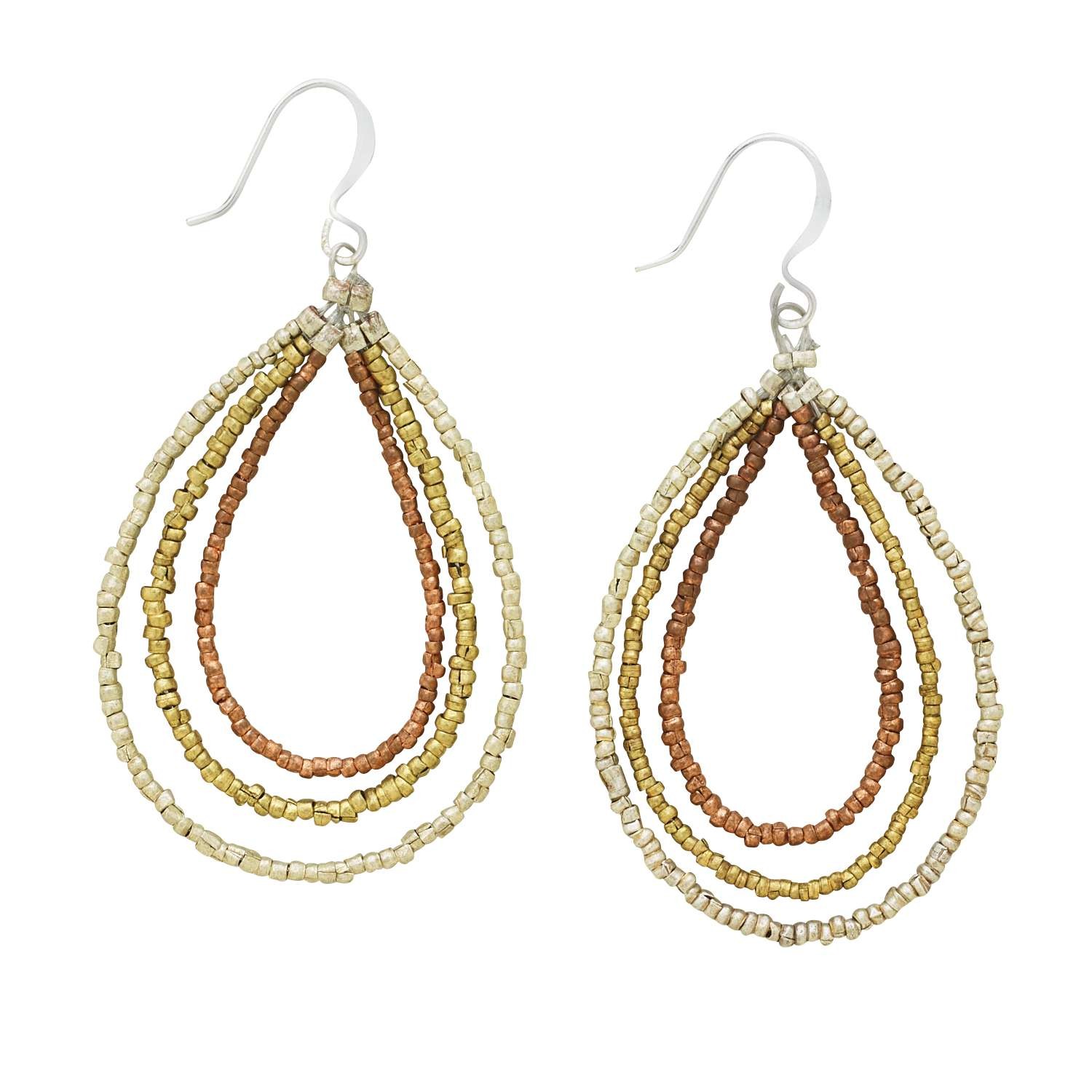 The influx of population has stressed the region where there is no means of earning an income. By far the largest proportion of “tsebeltegnas” (people seeking holy water) are those living with HIV/AIDS. Some come willingly, motivated by genuine belief in the healing properties of the water. Others come as a last resort, having been ostracized from their communities and families because of the stigma associated with the disease. The Entoto program has reached out to people seeking healing at the church, offering them a new opportunity to support themselves, and to live more healthfully. Many have few options for earning a living, and are vulnerable to all of the risks associated with a life of begging. Believing that developing income generation was a much better form of assistance than simply handing out aid, Beza Entoto Outreach was established as an income generation project. In addition to income opportunities, the project provides adult literacy and math classes for artisans, as well as healthcare, counseling, transportation money, and a children’s after-school tutoring program. Beza Entoto Outreach currently works with about 120 artisans. 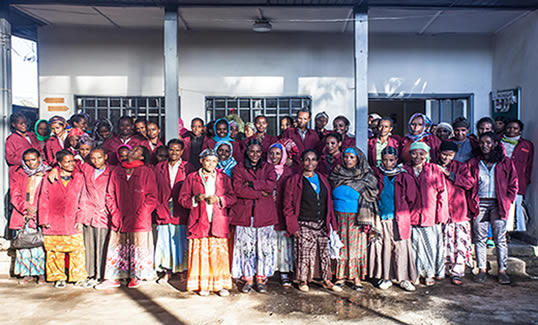 BOMBSHELL JEWELRY FROM CAMBODIA
Our second featured jewelry line comes from the bomb casings of bombs dropped on Cambodia during the Cambodian Civil War. The Cambodian Civil War pitted the Communist Party of Kampuchea (known as Khmer Rouge), and their allies North Vietnam and the Viet Cong, against the government forces of the Kingdom of Cambodia and their allies South Vietnam and the U.S. U.S. involvement included assisting the central government with massive aerial bombing campaigns as well as giving material and financial aid. The five year war ended with the victory of Khmer Rouge, which then led to the Cambodian Genocide under Pol Pot, one of the world’s worst human rights violations in history, with an estimated 1.5 to 3 million victims. Despite all these hardships, the artisans of Rajana Association of Cambodia find hope in their war-torn country by making something beautiful from bombshells collected from fields in their country. 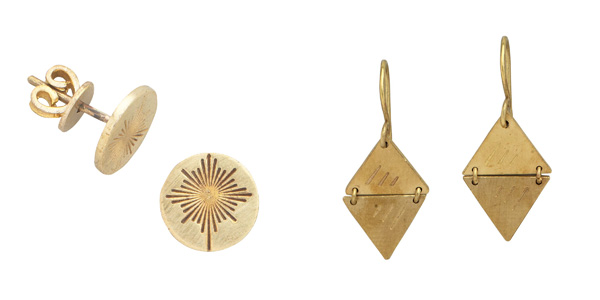 Through development of traditional craft-making skills, Rajana helps maintain and rebuild Cambodia’s rich cultural traditions that were damaged in the country’s wars. Though Rajana Association began in 1995 as an income-generating project of the British non governmental organization Southeast Asian Outreach UK, Rajana has been owned and operated by Cambodians since 2000. Rajana has two workshops, one in Phnom Penh and one in Siem Reap, near the temple of Angkor Wat. Workers train for three months at Rajana’s workshops, then work there for three years, after which they are free to seek employment elsewhere, though some choose to continue working for Rajana. Rajana’s artisans benefit from interest-free loans and receive help to pay for health services and education costs. Our shop manager, LynAnne, spend a year volunteering with Rajana Association in 2010. She says, “The artisans at Rajana are so creative and talented. Many of them lived through the Khmer Rouge years. They have seen so much destruction, and yet they are filled with hope for the future.”

Lastly, our wholesale partner Article 22 works with artisans who make beautiful, modern jewelry from some of the roughly 80 million unexploded bombs dropped on Laos during the Vietnam War. As part of the U.S. Secret War in Laos (1964 to 1973) to block Communist supply chains to North Vietnam, the U.S. dropped more than two million tons of ordnance in Laos during 580,000 bombing missions—equal to a planeload of bombs every 8 minutes, 24-hours a day, for 9 years—making Laos the most heavily bombed country per capita in history. The bombings destroyed many villages and displaced hundreds of thousands of Lao civilians during the nine-year period. Up to a third of the bombs dropped did not explode, leaving Laos contaminated with vast quantities of unexploded ordnance. It will take almost two millennia to clear the country. 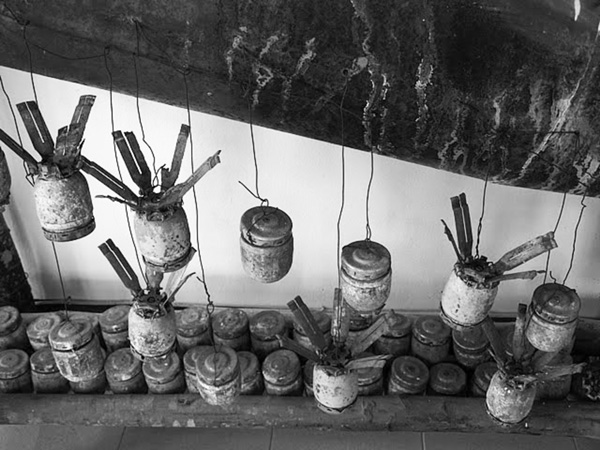 Article 22 tells transformation stories of devastation to design. Artisans of Naphia, Laos, returned to their bomb-littered village in 1974 upon the close of the Vietnam War to find bombs, both exploded and unexploded. Article 22 was created when founder Elizabeth Suda discovered artisans melting U.S. bombs into spoons in a rural Laotian village, giving her the idea to create jewelry using this same method. 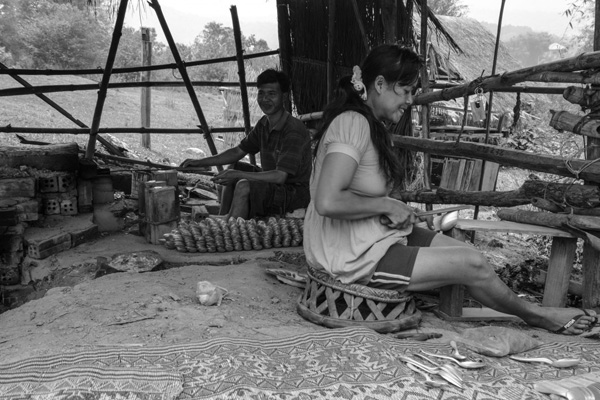 Article 22 now partners with artisans in Laos who melt war scrap into bangles, charms for bracelets, and other jewelry. Artisans of Naphia earn at least five times the local hourly minimum wage, providing them with the disposable income for books, school, fuel and medicine. Additionally, each piece gives back to support village development, community endeavors, and further de-mining efforts. Each purchase also contributes to Mines Advisory Group to safely and expertly clear some of the 80 million unexploded bombs contaminating land in Laos. By purchasing just one “Dropped and Made in Laos” bangle or “Love is the Bomb” Bracelet Wrap, you can help clear 3 square meters of Laotian landscape. 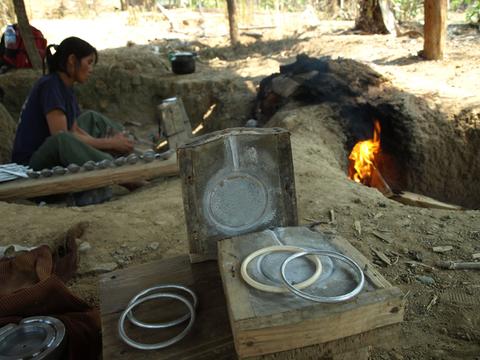 By wearing jewelry from these three collections, not only can you help support artisans in the developing world, but you can also help share the message of peace that these artisans have created with their own hands, transforming violent objects into beautiful and meaningful jewelry.